Over 20 local community and legal groups, including Redfern Legal Centre, have joined forces as the Redfern Waterloo Alliance of Aboriginal Community Controlled Organisations and Allies to start a campaign for more social and affordable housing. 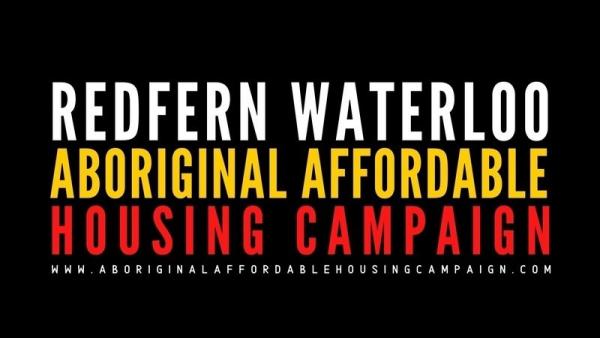 Add your voice to the campaign by signing the petition here.

Redfern is, and has been, an important place for Aboriginal people. This is where the Aboriginal civil rights movement began and where many actions for self-determination took place such as the 1938 Day of Mourning, the 1965 Freedom Ride, and the ongoing struggle for land rights.

The gentrification of inner Sydney suburbs has meant that historically working-class suburbs such as Redfern and Waterloo have become highly desirable suburbs in the property market. The associated huge increases in rental prices have locked out many Aboriginal people who were previously living in these suburbs in private rentals. Many Aboriginal community members who are in social housing in Redfern and Waterloo continue to live there. Likewise, the Aboriginal services they access are still there. However, many Aboriginal people who grew up there still see this area as their home but can’t afford to rent there.

What is missing is affordable housing for Aboriginal people in Redfern and Waterloo.

The Alliance seeks a policy response and commitment to targets from the NSW Government to deliver Aboriginal affordable housing on all government-controlled land in the Redfern Waterloo area.

The Redfern Waterloo Alliance of Aboriginal Community Controlled Organisations’ campaign for Aboriginal affordable housing in Redfern and Waterloo calls on the NSW government to deliver:

A petition in support of the Redfern Waterloo Aboriginal Affordable Housing Campaign is open for signature here.