Thousands of Australians may be deprived of crisis legal support because of a new means test applied by community legal centres (CLCs). 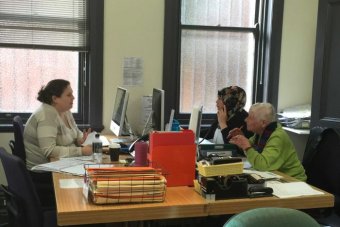 The centres provide free legal support to more than 200,000 people each year, but the Federal Government has narrowed the criteria for who is entitled to their services.

If legal centres fail to comply, the Commonwealth could cut their funding, forcing them to close their doors.

"If [legal centres] don't provide 85 per cent of their representation services to people in financial hardship, they will not receive funding the next time the money's meant to flow from the Commonwealth to the state," he said.

He said the new rules are changing the way community legal centres choose who to help.

"Our fear is that having to meet this benchmark means that we're going to have say no to certain groups of people who are quite vulnerable in the community but do not necessarily meet the test of having financial hardship," he said.

Mr Arrage said there were a number of people who might not make the cut anymore.

Mr Arrage said those battling to claim home insurance after the Queensland bushfires might also miss out.

"People were making insurance claims and so they might have been people overall, kind of on middle incomes, kind of your everyday person who wouldn't meet the financial hardship test, but they're struggling to make a claim with the insurance company," he said.

Mr Arrage said the new rules may also exclude people with a limited capacity to represent themselves, including people with an intellectual disability.

Family whose house burnt down praise support from legal centre

Elaine Gann is one person who has been helped by a community legal centre, but may not have qualified under the new rules.

Her home of 26 years burnt down two years ago and almost nothing could be saved.

"We managed to salvage the laptop, the bag of photos, but pretty much not much else. Nothing," she said.

Ms Gann's insurer refused to pay out because they suspected her son, Mike, started the fire.

"After eight months he was eliminated as a suspect, however the insurance company still accused my son of lighting a fire and then they also accused me of putting in a fraudulent claim," he said.

The Financial Rights Legal Service stepped in and helped Ms Gann lodge a successful claim with the Ombudsman.

Mike Gann said the family could never have afforded a lawyer.

"Even people that work full time, it doesn't mean that they earn enough money to pay for solicitors' fees," he said.

Even though she was stuck paying the mortgage on her destroyed home, as well as rent on her new home, Ms Gann's administrative job would likely have disqualified her from receiving free legal help.

Mr Gann and his mother said they hated to guess what might have happened if they had been turned away.

"We would've ended up in a lousy caravan in a caravan park because that's probably what we could afford."