Many young people say the controversial practice leaves them feeling “traumatised” and “embarrassed”.

Sniffer dogs are as much part of Sydney life today as overpriced brunches and sudden public transport breakdowns.

Take a wander through Sydney’s Central station during peak hour and you may well find yourself stopped by police, taken behind a semi-public barricade and strip searched – even though, statistically, your pockets will probably yield nothing more illicit than a set of house keys.

A report released last week found the number of strip searches conducted in NSW has increased almost 20-fold in the past 12 years.

Research suggests that no drugs are found in an overwhelming majority of drug dog searches, yet those stopped are still made to endure procedures such as strip searches and “squat and cough” tests many have described as “traumatic and “dehumanising”.

This week, news.com.au spoke to more than a dozen young people who had been strip-searched by police on suspicion of being in possession of illicit drugs.

In March, 19-year old Lucy Moore was stopped by a drug dog while attending a festival in Sydney and taken away to be strip-searched in a semi-private space.

Ms Moore said she was interrogated, held for over an hour and ultimately still kicked out of the festival – all despite no drugs being found on her.

One Sydneysider, who declined to be named, said he was strip searched a few years ago at Marrickville Bowling Club, a lawn bowls centre in Sydney’s Inner West.

“In full of other patrons, they made me take off my shoes and socks, looked inside my underwear and checked all my pockets and wallet, becoming increasingly aggressive and frustrated as they found nothing”.

“Police officers do not enjoy carrying out strip-searches, but it is a power that has been entrusted to us and searches reveal drugs and weapons,” a spokesperson for NSW Police said.

They said that over the last five years, 82 per cent of strip-searches over the past five years resulted in either drugs being found, or the person admitting to recent use or possession.

These statistics are incongruous with separate research conducted by the Redfern Legal centre, Sniff Off and the National Drug and Research Centre, which all argued the figure of “false positives” was far higher.

“This figure is misleading, because admitting to recent use or possession of drugs is not an offence. To be charged with possession of a prohibited drug police must prove a person knowingly had possession of the drug at the time of their interaction with police,” said Samantha Lee, head of Redfern Legal Centre’s police accountability practice.

“Also the mere possession of the drug on its own would not meet the legal requirements of ‘serious’ and ‘urgent’ to conduct a strip search,” Ms Lee said.

Police said strip-searches were only carried out in a minority of cases, but did not comment on their increase over the past decade.

From “illegal” birthday parties to suspicious fast-food orders, Aussies picked up a very unusual pastime during the Covid pandemic. 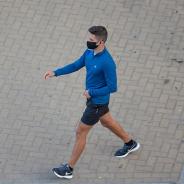