REDFERN: Justice Virginia Bell, a long-time resident of Redfern, spoke recently at a fundraising event in support of the Redfern Legal Centre. She gave those present some insights into the history and function of the Centre. 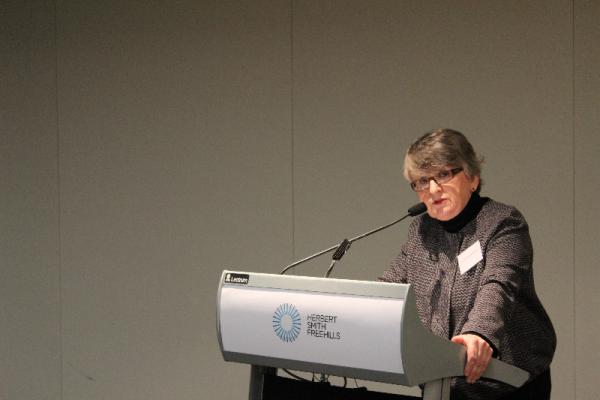 Those who established the Centre hoped to avoid the constant referring of people to other services rather than giving on-the-spot care and advice. They developed state-wide relationships with members of the police force, as well as many partnerships with other agencies and firms.

When Peter Stapleton headed up the Board of Directors, he set up the very helpful pro-bono practices of the Centre. This was just part of generous relationships between the Centre and many talented lawyers and the Bar. To this day, the goodwill is sustained, so that Redfern holds its own in offering legal support to many people.

One of its early areas of concern was the Boarding House Act, which gave people living in boarding houses very little protection. Last year, new regulations were enacted, which improved some rights. However, people still often need lawyers to advise them. So many people living in boarding houses are vulnerable – usually single and without family support, sometimes addicted, frequently from a non-English speaking background.

In 2010 the Legal Centre introduced a strategic change to its work. It added credit and debt advice, with financial counsellors state-wide. There is also now a focus on issues around domestic violence. This is a complex and difficult area of work and needs a specialist independent counsellor.

All the above areas of work, plus others among vulnerable members of the community, mean that the Redfern Legal Centre is always in need of financial support from those who are more prosperous and who care about the formation of true and just human community – especially in the Redfern area.

One of the very impressive features of the fundraising gathering was the large number of young lawyers present, alongside various community leaders.

On August 27 the Federal Attorney General, the Hon. Mark Dreyfus QC MP, announced funding of $200,000 over four years to the Redfern Legal Centre. This funding comes at a crucial time for RLC. The Centre recently lost $285,000 of NSW government funding for its credit and debt service.

“Credit and debt problems have always been one of the highest areas of demand for our services,” said Ms Shulman, Redfern Legal Centre CEO. “Money problems can have a significant impact on the health and wellbeing of disadvantaged people and can be a significant cost to the government. High housing costs are a problem in our catchment area and unresolved financial problems can lead to loss of housing. The correlation between the incidence of violence against women and financial and social stress is also well documented.”

Find the article on the South Sydney Herald website.