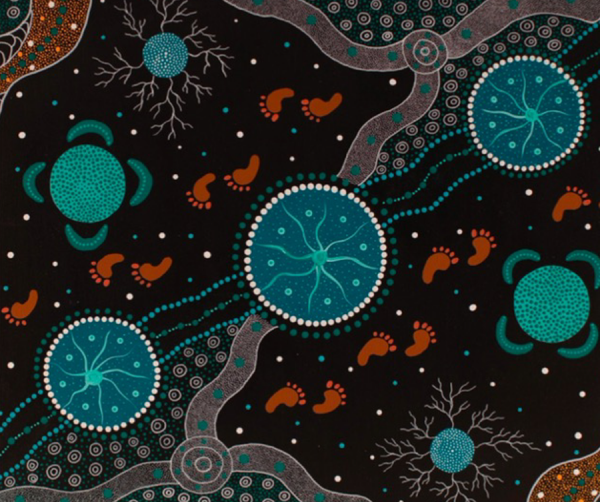 Justice For All (detail) by Sharon Smith, 2020, Artwork commissioned for Redfern Legal Centre with funding support from City of Sydney.

The 2020 NAIDOC Theme: Always Was, Always Will Be. recognises that First Nations people have occupied and cared for this continent for over 65,000 years. We are spiritually and culturally connected to this country. This country was criss-crossed by generations of brilliant Nations.

Australia has the world’s oldest oral stories. The First Peoples engraved the world’s first maps, made the earliest paintings of ceremony and invented unique technologies. We built and engineered structures - structures on Earth - predating well-known sites such as the Egyptian Pyramids and Stonehenge.

Our adaptation and intimate knowledge of Country enabled us to endure climate change, catastrophic droughts and rising sea levels.

Always Was, Always Will Be. acknowledges that hundreds of Nations and our cultures covered this continent. All were managing the land - the biggest estate on earth - to sustainably provide for their future. Through ingenious land management systems like fire stick farming we transformed the harshest habitable continent into a land of bounty.

NAIDOC Week 2020 acknowledges and celebrates that our nation’s story didn’t begin with documented European contact whether in 1770 or 1606 - with the arrival of the Dutch on the western coast of the Cape York Peninsula.

The very first footprints on this continent were those belonging to First Nations peoples.

Our coastal Nations watched and interacted with at least 36 contacts made by Europeans prior to 1770. Many of them resulting in the charting of the northern, western and southern coastlines – of our lands and our waters.

For us, this nation’s story began at the dawn of time. NAIDOC 2020 invites all Australians to embrace the true history of this country – a history which dates back thousands of generations.

It’s about seeing, hearing and learning the First Nations’ 65,000+ year history of this country - which is Australian history. We want all Australians to celebrate that we have the oldest continuing cultures on the planet and to recognise that our sovereignty was never ceded.

Always Was, Always Will Be.