Redfern Legal Centre has joined forces with class actions experts Slater and Gordon to announce an investigation into class action claims against NSW Police concerning the use of invasive and unlawful strip searches. 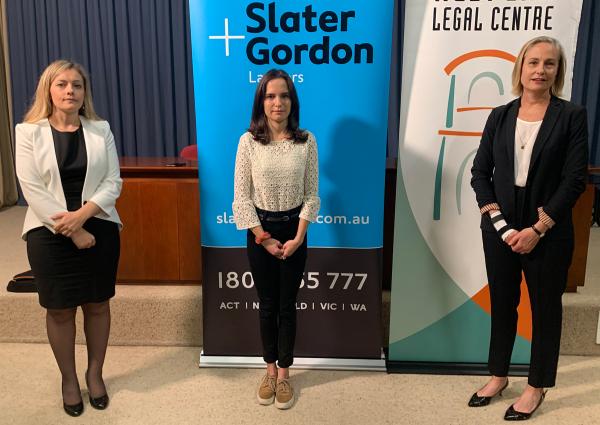 People who have been strip-searched by NSW Police in the past six years are encouraged to share their story and register for the class actions investigation at www.slatergordon.com.au/stripsearch. Registration is confidential and free.

This action builds on Redfern Legal Centre’s efforts to reform strip search law in NSW through its Safe and Sound campaign and seeks compensation for potentially thousands of people who may have been unlawfully searched by NSW Police in the past six years.

Research by UNSW has identified that in just over a decade, there has been a 20-fold increase in the number of strip searches conducted by NSW Police, with the majority of these searches finding nothing. Data shows that young people and Aboriginal and Torres Strait Islander people have been disproportionately targeted.

Young people, including minors, account for almost half the strip searches in NSW

Figures uncovered by RLC via freedom of information laws and published by The Guardian in November and December 2019, revealed that there were 11,304 strip-searches conducted by NSW Police on men and 3,919 strip-searches on women since 2016.

By law, strip searches outside police stations can only occur when the circumstances are serious and urgent enough to warrant them. Recent Law Enforcement Conduct Commission inquiries have found that a number of strip searches of young girls and boys were unlawful and NSW Police failed to apply and understand strip search law.

“Horrific stories of police strip searches continue to come to light, including the strip searching of children as young as 10, children being asked to squat and cough, lift their gentials, and have a police officer look into their body cavities, without the support of a parent or guardian present,” RLC police accountability solicitor, Samantha Lee said.

“By seeking long-overdue justice for people who have been unlawfully searched, this class action is also an important step toward achieving change to prevent more traumatic and unnecessary strip searches in NSW,” Ms Lee said.

“Unlawful strip searches are eroding community confidence in NSW Police, and people are entitled to expect that police will follow the law," Slater and Gordon Senior Associate Ebony Birchall said. "There are systemic problems such as inadequate police procedure manuals which are providing incorrect instruction to officers on how to lawfully conduct searches.

“People who have been subjected to unlawful and invasive searches by NSW Police have rights to seek redress. By grouping these claims into potential class actions, people can stand together and demand change," Ms Birchall said.

In June 2020, RLC uncovered police data revealing that Aboriginal and Torres Strait Islander people have been disproportionately targeted by police conducting strip searches in NSW over a recent two-year period.

The data, published by Guardian Australia, shows that 12% of stop searches in NSW between 2016 to 2018 were carried out on Aboriginal and Torres Strait Islander people, who make up just 3.4% of the population in NSW.

Speaking to NITV TV News, Samantha Lee estimated that this number could actually be much higher.

“I think you could probably double those numbers that we have been provided,” Ms Lee told NITV News.

“What we have found out through the Law Enforcement Conduct Commission (LECC) public hearing - which is the police watchdog - is that police are not always recording strip-searches and that police actually don't even know what a strip-search is under the law,” she said.

“The ALS represents a number of young people who have been forcibly strip searched by police who already have backgrounds of trauma, cognitive and other disabilities. The excessive use of personal and strip searches by NSW Police is causing significant emotional and psychological harm to Aboriginal communities, particularly children and young people,” Ms Crellin said.

Anyone searched in an invasive manner by NSW Police (for example, by touching beneath underwear or requiring clothes to be removed) since 2014 can register for the class actions investigation and share their story at www.slatergordon.com.au/stripsearch or by emailing stripsearch@slatergordon.com.au.

Registrations are confidential and free.  Further information about what constitutes a strip search is available here.

NSW police strip-searched more than 340 school-aged boys in the past three years (The Guardian, 9 December 2019)